On 21 June 2016, the Conferment Ceremony of “The Order of the Rising Sun, Gold Rays with Rosette” upon Mr. Radboud Molijn, Managing Director of the Dutch & Japanese Trade Federation, was held at the Residence of Ambassador Inomata.
At the ceremony, Ambassador Inomata delivered a congratulatory address and conferred the decoration upon Mr. Molijn after presenting the Patent of Decoration. 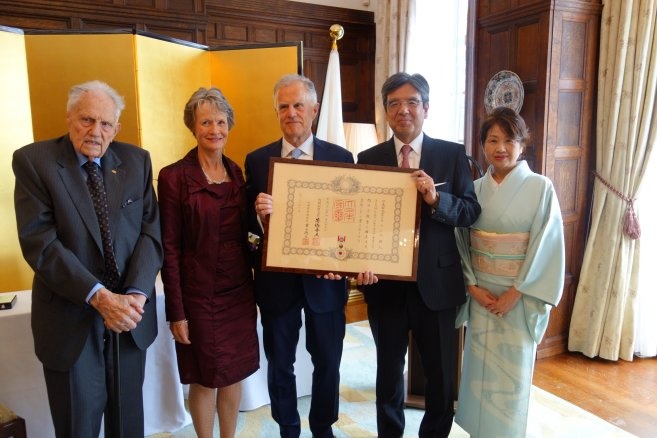 On April 29 2016, the Government of Japan announced the foreign recipients of the 2016 Spring Conferment of Decorations.

Among them, Mr. Radboud L.J. Maria Molijn, Managing Director of the Dutch & Japanese Trade Federation, received ‘The Order of the Rising Sun, Gold Rays with Rosette’, in recognition of his significant contributions to strengthening the economic relations and  promoting mutual understanding between Japan and the Kingdom of the Netherlands.